Hello, folks! A lot of people ask me how we say our company name. You know, that word that starts with the ‘T’?

So I thought I would give you this little musical explanation. It goes like this:

Yes, we say ‘Ten-AH-to’! The word itself comes from two words.

The first word is ‘tenacity‘. After we had been in business for about 15 years, we decided to rebrand ourselves. Our previous name was ‘Start Marketing‘ because back then, the biggest thing for me was, “Oh, I’ve just got to start this thing!”

I later realized after 15 years, it’s not just about starting, it’s really about sticking with it. Especially when it comes to marketing and perfecting your methodologies for growing your business. So, that’s where the ‘tenacity‘ comes from.

The second word is actually tied into this musical interlude that I just played for you. It is a ‘tenuto‘, which is a little marking that you see over a musical note. When you see this marking, it means that that note should be brought out to be heard and it ensure it receives its full value. (E.g. a quarter note gets held for the full beat, in 4/4 time, for those who know music.) 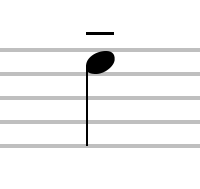 So, you hold it as long as you can hold it within the musical confines of keeping the beat.

That’s exactly what we do for our clients in a lot of ways. We ensure that their messages are brought out to be heard and we make sure they get the full value. Not just from our services but the full value that they are entitled to when they deliver their services so that their pricing and their profit margin is maximized.

By the way, as you can see from the video, we have a lovely piano in our office.  And if you ever would like me to sing you a song, I will always say yes!  Give us a call any time!