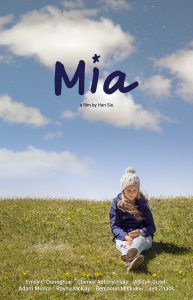 At Tenato, we are very proud of our Associates’ creative talents, so we thought we’d share a great personal achievement recently reached by Han Siu, our Web and Video Producer.

Han spent the month of May creating a short film to submit to film festivals across the country, and we were excited to see it. It’s a rather haunting look at 24 hours in the life of young Mia, and her search for her older sister when she doesn’t come home one night.

This was Han’s second go at writing a short film; the first was in 2009. I wrote and directed original music for that one, and it was featured at that year’s Calgary International Film Festival.

Since then Han says he’s done quite a bit of experimenting and came into this project feeling much more confident of his technical skills, hence his new foray into shooting and editing with this short film (he didn’t shoot nor edit the first one).

Mia was shot on a small DSLR camera, which is evident in the scenes where Mia is downtown or on transit — you can tell that the people in the background aren’t actors, and also that they have no idea that they’re being filmed. Han tells me he likes shooting this way because he can travel light when shooting and be more spontaneous — a fact which he feels leads to a more natural-looking finished product.

One element that he says was really important to the finished look of the film was the time he spent on colour grading. According to Han, the footage looked only half as good straight out of the camera as it did in the final edited film. He says he feels like colour grading is a really important step that many people skip due to constraints of time and money, and that so much — contrast, colour levels, the specific look — can be altered in this step.

So, do you want a taste of the film? You’ll have to wait until it makes the festival circuit!