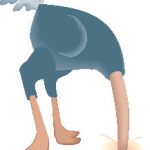 As a Public Relations professional who “came of age before computers” I have been feeling scared and intimidated by social media.  But the Alberta Wild Rose Party “boobie bus” incident got me thinking forward……

Was that social media storm sprung on purpose?  Were we just tweeted to one of the best political one-liners ever with a campaign launch that led off with “Guess we’ll have to make a couple of changes huh?”

What if it wasn’t an accident but rather part of an overall media strategy to bridge the social and traditional and a cleverly-executed publicity stunt? Eureka!  The time is long past for me to stop feeling scared and intimidated and to move forward.

Maybe it’s time for me and many of my Baby Boomer colleagues to take our greying heads out of the sand and take “social” seriously.

I do still worry about the potential of ‘the few’ to use social media networking and technologies to arouse, anger, and incite ‘the many’ and to accelerate disorder.  How can reason prevail in 140 characters?

For example, I think social networking played a destructive role in last spring’s Stanley Cup riot in Vancouver and this year’s St. Patrick’s Day riot in London.  The “old fogey” part of me fusses about that abuse of power.  ( I wonder if my ancestors said the same thing about the invention of the printing press and the telephone! )

Nevertheless, the flip side of that power is exciting.

The power to inspire, engage, organize, raise awareness and simply communicate like never before has increased exponentially.

So as a 21st Century PR professional  I am “taking social seriously” which means I am  learning the “what” and “how” of internet and social media platforms and networks by literally taking the tools in hand, attending workshops and courses and hanging around some very smart younger people who are NOT scared or intimidated.

Even more important though is that I won’t get so enamoured with the tools that I lose track of the need to understand and answer the question WHY?   I must always ask if using this or that tool of communication is an appropriate tactic to move an organization’s overall strategy forward.

The reality is that just because we have many more tools of communication in our PR toolbox, what hasn’t changed (and never will) is the need to consider them in the context of an overall strategy.

Note to other “Came of Age Before Computers” PR people:
My colleague Ernest Barbaric is involved on the committee presenting Social Media Shift 2, a conference on May 10, 2012 at Mount Royal University focusing on “Bridging the Gap Between Traditional Marketing and Social Media”.

It’s never too late to learn.

One thought on “Social Media & the Boobie Bus”