10 Simple Marketing Tips for Improving your Performance at Trade Shows 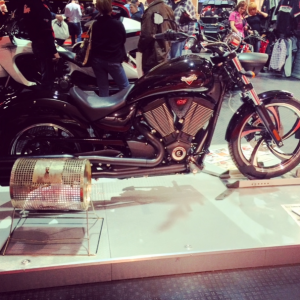 I attended a wonderful trade show yesterday – the Calgary Motorcycle Show!  I had been looking forward to it for the past few weeks.  Winter has been really cold with far more snow than usual here in Calgary– and now that we have turned the corner into January, all I can think about is getting back on my bike!

I looked at hundreds of booths yesterday, and with my marketing brain working in the background, I thought I would offer some good advice to businesses who are exhibiting in trade shows.

Finally, no tradeshow is worth doing unless there is a plan to take the leads generated and FOLLOW UP, ideally within a week or two.   Split the leads between the salespeople evenly, or devise a way to have the sales team mark the prize draw entries as they go in the box according to people they spoke to (one idea: you might have different colour prize entry ballots that each salesperson is handing out during their shifts). That way, you’ll not only know which people on the floor should follow up the leads, but which ones worked the hardest to collect them throughout the show.