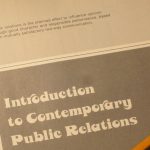 My late parents were proud of my career success in Public Relations even though they didn’t really know what I actually did for a living.  But they figured I must be good at it because I kept getting  good jobs and a lot of awards and accolades for doing it.

When I parroted a textbook definition of PR to them  30 years ago — Public relations is the planned effort to influence opinion through good character and responsible performance based upon mutually satisfactory two-way communications – their eyes  glazed over.

Mom  liked that bit about “good character” though, which supported her notion that St. Judi was saving the world.  Dad was especially grateful when I gave him a mnemonic device — that the P stood for “performance” and the R stood for “recognition”.

It was always easier for my parents to explain Judi to their friends when she was a reporter, though, so the description they liked the very best was that my job in PR was to keep getting good stories into the newspaper.

I had left the newsroom in 1970, and had already been practicing PR for a decade when, in 1980, I decided to go for accreditation (APR)  with the Canadian Public Relations Society.  Back then,  the above definition came from the profession’s  bible,  Effective Public Relations, published in by Cutlip and Center which was already in its 4th edition by the time I actually cracked the cover of a PR text book.

Today’s professionals come into the field with diplomas, undergrad and post graduate degrees yet  even with all that scholarship, it was only recently that a modern 21st Century definition was democratically adopted by the Public Relations Society of America.

“Public relations is a strategic communication process that builds mutually beneficial relationships between organizations and their publics.”

If they were alive today, my parents’ eyes would still glaze over.  As would my explanation that the Americans arrived at their definition using online and digital strategies and social media tactics.

The definition was developed from an extensive online “crowdsourcing” campaign to industry professionals and the general public.  After 16,000 web page views, 900 submissions and 70 comments, a “word cloud” formed

From this extensive effort,  members of PRSA and a dozen other industry associations (including the Canadian Public Relations Society) shook out three brief definitions and put it to the people.  The winner took it with 671 votes, 46.4 percent of the total ballots cast.

But even after all that buzz the Canadians didn’t go along with it, and that’s a subject for another blog. 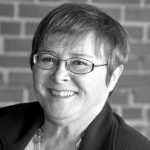 About the Author - Judi Gunter

Judi Gunter BA, APR, FCPRS, L.M., Public Relations Strategist Judi blogs on the adventures of how a techno-phobic baby boomer conquers the rapidly evolving world of PR…As an honoured fellow of the Canadian Public Relations Society, Judi Gunter has more than 30 years’ experience in the field of public relations. She has won several national PR awards in recognition of her expertise in planning, organizing and implementing public awareness programs.