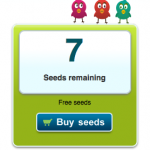 Assuming you checked out my blog 3 days ago, you’re aware that I ran a little test with an online tool called twiends.com which is a “seeding” method used to get people to follow your account on Twitter.

As soon as I bought and released my “seeds” the followers shot up to 405 from about 155.  From there, a few more were added the following day, where I peaked about 439.  Since then about 100 have dropped, so as of 3:23pm on Thursday, I’m looking about 354 followers.  This is still more than double of what I had, although it’s a bit of a steep price to “pay” for followers.

Mind you, I’m not *technically* buying followers (as Twiends.com clearly states that they are promoting your profile, not selling followers) but as any marketing-oriented person would look at advertising, the cost of getting the sale still counts.

So, cost-wise if I have to spend $40 to get 200 followers, that’s 20 cents per follower, which is pretty expensive, depending on how you look at it.  I’m writing about 3 – 4 blogs per week, each of which takes me around an 1 – 2 hours to do, and brings in an average of 8 followers a day; so maybe if I value a blog at $300 of my time, then it’s more like $20 per follower for the legitimate “using the blog to attract followers” route.  Could it really be a question of 20 cents or 20 dollars to attract a follower?  If so, Twiends is sure a cheap, fast way to just GET FOLLOWERS.  (Actually, in this case, the experiment also gave me 2 interesting blog topics, so it was certainly was good value for the money…even just for the learning.)

Well, there are definitely other considerations.

The “seeded” followers are not likely really interested in my content, probably just in grabbing the “seeds.”  This means that they aren’t *real*, engaged followers who will sincerely care about what I have to say.  Looking at the list of new followers, I would have liked to have gotten business people who might actually care about the subjects on which I’m blogging.  Now, a lot of the followers in my list are people like “Sando” who describes himself as “I don’t know how to put this but I’m kinda of a big deal :-D” and some dude named “Ganang Saputra” who describes himself as “Akun yang gak bakalan bikin loe nyesal buat follow ^_^”  What the heck is this?  [By the way, if you are either of these people, please a) confirm you are real and b) work on improving your profile descriptions!].  This means the ONLY real value of such followers to me is to make the number look bigger.

UNLESS you consider that OTHER PEOPLE care about your number, and won’t read or follow you unless you have MORE FOLLOWERS in the first place.   Is this the case?

I doubt it.  When I make a tweet, my number of followers (or Klout score, for that matter) doesn’t display beside my twitter feed, fortunately.  If it did, then only the biggest tweeters’ posts would ever be read.  Or, can you imagine if twitter was arranged such that only popular tweeters’ material rose to the top of the pile – in other words,  if you ever wanted people to read your tweet, you’d have to hope they’d see it long after every celebrity on earth’s silly tweets were queued at the top?  That would make the whole system only as good as the traditional media used to be — i.e. only important people get interviewed and broadcast.

The beauty of Twitter, to me, is that everyone get’s their 2 cents, and what gets said goes into the chronological timeline once, and without favouritism.  That’s why I like using it to figure out what’s going on in the world, and what people are saying about it.  I also think that the nature and degree of truth of the comment is more important than who said it, so I re-tweet based on whether a comment is really worthwhile, and speaks to how I feel.  Of course, there are exceptions (such as a racist comment from a high-profile politician!).

So yes, now I have about a hundred so *weird* followers, who will again, likely drop off, along with the ones who actually wanted to hear what I have to say.

Remember when it comes to Twitter, the SIZE of your follower number ISN’T EVERYTHING!

One thought on “Twiends Seeding Results”